Compression Recovery can help in performance and injury prevention.  Get that “fresh legs” feeling by using our NormaTec Recovery System. R Studio offers Boise a tool professional athletes use to train harder, recover faster and perform better.  Compression can clear metabolic waste, reduce soreness and helps improve circulation so you can keep training!

The pulsing compression simulates the “muscle pump” of the limbs.  This greatly enhances the movement of fluid  out of the limbs after intense use. The gradient hold utilizes constant pressure to keep the body’s fluids from being forced to one end of the limb while the pulsing continues. The directionality of flow occurring in the venous and lymphatic one-way valves produces fluid movement similar to that seen in peristalsis. The distal release prevents backflow of fluids by releasing the hold pressures in each zone, allowing each limb to gain maximal rest time without significant pause between compression cycles. 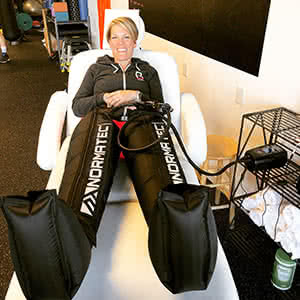